Top reasons older dog whining at night and how to stop it! 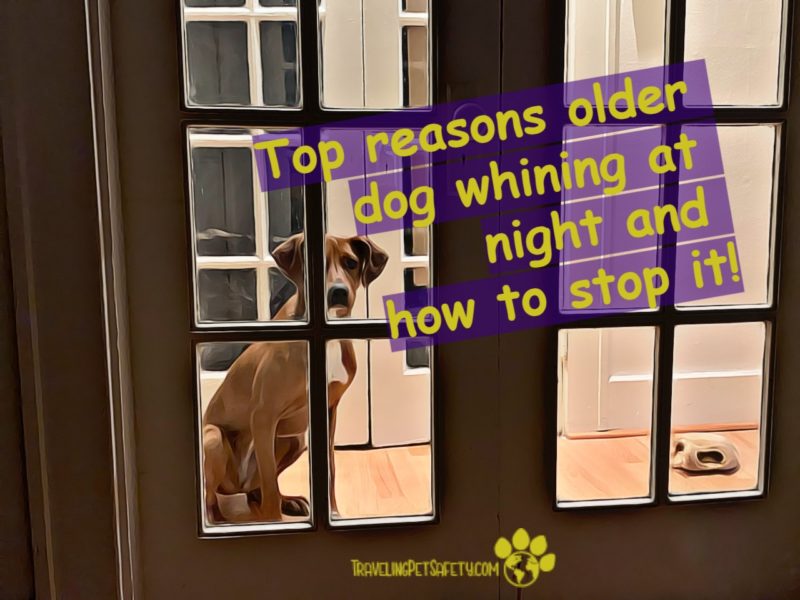 Do you have an older dog whining for no apparent reason? If you answered yes… I feel for you. Nothing is worse than a dog keeping you up at night. Truthfully, when an older dog whining at night it isn’t for nothing, it’s their attempt to communicate with you. It’s your job as a dog owner to understand what they are trying to tell you.

Dog whining is caused by a multitude of things, the reason for whining can range from stress or down to the need of a potty break.

My dog Sage had nights when she whines endlessly, and to be quite honest it used to drive me nuts. Those were trying times. I took the time to understand why she was whining, become knowledgeable of the difference between dog whining and dog whimpering. Through my research, I learned what to and what not do… now when Sage whines at night I know how to stop the unwanted behavior immediately. I will help you do the same with your dog. In this article I will explain why older dogs whine at night, the difference between whining and whimpering, as well as give you tips to limit dog whining at night.

What is dog whining?

What is dog whining you ask? No, it doesn’t mean your dog is throwing a tantrum in the middle of Target because you said no their favorite dog treat.

Dog whining is a repetitive high pitch sound made nasally with their mouth closed. You’ll find that dogs that are hurt will exaggerate the sound of a whine into a whimper or a yelp. I’ll explain the sound and the difference a little later in the article.

Dogs use whining is a form of communication to indicate to their human that they need something, frustrated.

There are countless reasons your older dog whining at night, but why does this behavior occur? We need to examine the things that cause your dog to whine in order to answer that question. Let’s look at a few common reasons older dogs whine at night.

As you know, dog’s do not possess the ability to use dialog to speak, but that doesn’t mean they aren’t communicating with you. Instead, they rely on other means to communicate with us. Canines use doggy body language and various sounds to talk to their humans. They’ve mastered letting us know what they need without using one word. Pardon my Haitian creole, “Luh get man” but that’s freaking incredible.

Older dog whining at night may be due to a multitude of reasons, here are the most common explanations for their whining.

Dogs are an affectionate creature and require a lot of attention. Dog’s that want attention will sit within viewing vicinity, stare at you and whine. This is especially true with Dog that is lonely or just need a little affection from their human. For example, my Rhodesian Ridgeback Sage requires a lot of affection… 15 belly rubs, 25 kisses and at least 30 minutes of cuddle time throughout the day before bed. When we break our routine, she has a hissy fit, follow me around and whine until I give her some attention.

Dog’s that are older loose elastic in their bladder which means they may need to use the bathroom more frequently. In most cases when the older dog keeps whining night it is because they need to go out and cannot hold it any longer. Unless you want a mess in a corner somewhere in your house I advise taking out.

Limit whining at night by cutting down feeding and water intake at night if late bathroom breaks are a problem. Another good idea is to take your older dog out for potty breaks as much as possible before bedtime.

This will save you from cleaning a mess and add extra sleepy time for you. Who couldn’t use some extra sleep…? I know I can use some more sleep! My lack of sleep is no longer because of Sage by the way.

You should consult with your veterinarian and decide if increasing food and water during feeding is a good option for your older dog. You should be careful if you’re feeding your dog late at night as this can cause obesity in your dog.

Older dogs can be big babies… they use whining as a tool to indicate that you have something they want, such as a favorite toy.

Sage is notorious for this… She has a loud squeaky ball that she absolutely loves to play with, especially when I’m working on an article. When she becomes too loud and a distraction, I usually take it away and give her another toy that isn’t as noisy. She makes sure her whining is as annoying if not worse than the sticking squeaky ball. The things I deal with for this dog!

Before we move to more serious reasons your dog keeps whining, ask yourself these questions

Did you recently change your dogs surrounding?

Change of space such as a new kennel will result in dog whining in crate. Another reason your older dog is whining at night may be due to rearrangement of the home or moving into a new house.

How long are you walking your everyday?

Lack of exercise could be a reason your older dog whining at night, the minimum time is 30 minutes every day.

Did you recently add a baby or a new puppy to the equation?

An older dog that is used to being alone usually doesn’t like the idea of having a new dog or baby in the home. They may act out and whine at the beginning but usually come around after a few weeks.

Dogs that are used to getting all your attention may get jealous of a new baby. Their whining is an attempt to gain more attention, some older dogs are even influenced by the sound of a baby crying and my whine as well.

I hear people say “old dog whining for no apparent reason” all the time, that just isn’t true. When dog’s whine it is for a reason, even the most subtle changes can affect your dog’s behavior. Let’s move on to more serious reasons for whining.

A dog will communicate when there are more serious issues other than just wanting a toy or attention. You will be able to tell the difference between whining and whimper sounds… your dog body language will be the key factor in identifying the difference between the two. I further explain but before I do, here are some serious reasons your older dog keeps whining at night.

you may think that your older dog is acting like a new a puppy whining at night, but this may be because your pet has anxiety or is in fear. Dog anxiety can be caused by loud noise or changes, like putting your dog into a crate that is used to being free to roam. A simple thunderstorm can cause anxiety or fear in your dog as well, which leads to whining or whimpering at night.

Dog love consistency, even more so the older they become. Older dogs should be kept to a stick schedule as much as possible. Breaking your dogs routine will likely result in an earful at night. Although you can’t control all changes (i.e. storms or emergency sirens), you do possess the ability control where your dog sleeps at night, mealtimes, and when your dog goes outside for potty breaks.

When was the last time you evaluated your dog for injuries or joint pain? If you’re not sure, then start prioritizing your dog’s health! You should check your dog daily for aches pain and injuries… puppies and older dogs are more susceptible to sickness and injuries.

A dog that is in pain or sick will whine and whimper continently. If you notice the whining and whimpering persist, I suggest taking your dog to see a veterinarian as your dog could be in serious pain.

Some dogs develop neurological issues as they get older. Older dogs who exhibition crying behavior as age-related cognitive decline will whine and whimper seemingly without reason. Much like elderly humans, older dogs can develop dementia, confusion, and anxiety that lead to whimpering and whining and even howling, often at night.

Dog’s that are exhibiting behaviors of disorientation should be taken to the veterinarian for neurological evaluation.

Know the difference between common whining and more serious whimpering

Dog whining should not be confused for dog whimpering, they are very much different. I hear people confusing the two all the time. Like I mentioned earlier your dog will whine because they need a potty break, but a dog whimpering would be because they have a broken leg. See the difference?

(Don’t do what this guy did and scare your dog… That’s just cruel!!)

A whimper or a yelp is an indication that a dog is in pain. This may happen during dog playtime or an accident. Say, if your kids and dog are playing too rough, and the dog paw is accidentally stepped on, your dog will let out a yelp or even whimper. The whimper or yelp is used to communicate the dog’s distress to pack member or their human.

When your older dog whines at night, how do you respond? Do scold your whining dog? How about petting to stop the whining? Do you engage in playtime? These actions reinforce behaviors that teach your dog whining is acceptable and a way to get your attention even when misbehaving. It is important that assess why your older dog is whining at night and respond to it accordingly.

Dog whining is a learned behavior –

Dogs are smart creatures; it doesn’t take long for your dog to figure out there’s a direct connection that letting out a little whine and getting what they want. That’s exactly how canine “crying” turn into problematic behavior. If you respond every time with treats, petting or belly rubs, you’re teaching your dog that constant whining is acceptable. Do yourself and your dog a favor by correcting the unwanted behavior ASAP! Read these tips to stop your older dog whining at night.

how to stop older dog whining at night?

Finally, the answer to the question you’ve all been waiting for “how to stop older dog whining at night”. Alright, I won’t keep you waiting any longer.

I’ve listed ways to stop older dog whining at night. Be aware that all dogs are different. What works for one dog may not work for another, you’ll have to tinker and experiment with each suggestion to find what works for your dog. Also note, if your dog is in pain, the suggestions below will NOT work.

For more stubborn you can discipline unwanted behavior of dog whine by using a squirt bottle. Another option is to remove your attention from the whiner until your dog quiets down.

7 Fun Weekend Activities for you and your Dog

Have you ever been walking with your dog in your neighborhood and saw off leash dogs? Sure, you have… not a biggie right. Well, what if I changed it up a bit and I said Read more…

Rhodesian Ridgeback Shedding and How to Reduce Hair Loss in Dogs.

If you own a Rhodesian ridgeback or any short haired dog, then you certainly wouldn’t have to do much when it comes to grooming. This is because; they barely shed their hair, saving you the Read more…

Don`t copy text!
%d bloggers like this:
We use cookies to ensure that we give you the best experience on our website. If you continue to use this site we will assume that you are happy with it.Ok